In this scene, protagonist Davey Owen has sneaked into the basement beneath Live Girls, a peepshow in Times Square run by beautiful, deadly vampires. … 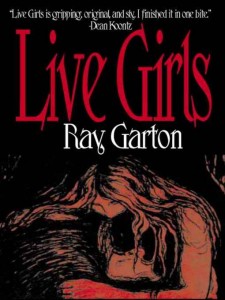 He began kicking his legs to push himself against the wall and to kick away whatever was in the dark before him.  Pressing his back to the wall, he reached into his coat pocket and clumsily removed the gun and penlight.  He flicked on the light and held it between his teeth as he gripped the gun in his right hand and prepared to use it.

At first he saw nothing.  The air was dusty and smelled … diseased.  It conjured up images in his head of gaping, cauterized wounds and freshly sawed bone.  Something dripped steadily.

Then the blackness beyond his light began to take shape and move.  There was a whisper.  Another.  A stifled giggle.

Davey heard the shuffling on the floor again and swung his beam downward to what looked, at first, like no more than a big lump in the floor, until its head looked up, its eyes squinting at Davey, and reached its stub of an arm toward him, its smile revealing rotted teeth.

Davey pushed himself to his feet and moved along the wall away from the creature.

It pulled itself closer to him with its other arm, except it wasn’t an arm, it was a stiffened, twisted wing, a bat’s wing with leathery folds and nail-sharp claws curling out of the top and dark veins that mapped the moist, tender-pink flesh.  It had no legs.  Saliva glistened on the creature’s lips as they pulled back even further into a rigid, black-tongued grin.

“Another live one,” it gargled, sliding closer, its fleshy stumps trailing behind.

“Gripping, original, and sly.  I finished it in one bite.”

“There are two vampire novels I think you can put on the same shelf with Dracula and I Am Legend.  One is ‘Salem’s Lot and the other is Live Girls.”