Patrick Hollenbeck is walking his dog Cosmo on a cold, misty night. … 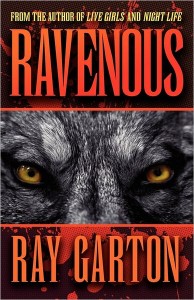 Each block in that neighborhood had two streetlights, and the first one was coming up.  Its yellowish light had a halo of mist around it.  As Cosmo led him through the pool of light, Patrick looked ahead and saw a dark figure walking toward them. The figure was all the way across Ivy and on the next block, walking rapidly.  As the dark figure stepped into a pool of light, Patrick laughed a barking laugh that echoed in the night — the man walking rapidly toward him was completely naked.  Although that moment of illumination was brief, Patrick was certain that the man was not wearing any clothes.

The naked man reached the end of the block, crossed Ivy, and stepped up onto Patrick’s block.  As he passed beneath the streetlight at that end of the block, Patrick flinched.  Suddenly, the man was wearing a full suit of dark clothes.  Or … was that some kind of dark coat?  Even his face looked dark.  He even seemed … taller.  Patrick frowned and quickly questioned what he had seen earlier.  He was certain the man had been naked — he’d seen it clearly.  Now, he appeared to be wearing something.  Where had it come from?  What was it?  It didn’t look quite right for a suit of clothes.  As the man continued to walk toward him, Patrick squinted a little.  With the other streetlights behind him, Patrick saw only a dark silhouette — what appeared to be a rather shaggy silhouette.

Cosmo stopped at a crepe myrtle tree, sniffed around, then stopped and lifted his head.  The dog looked down the sidewalk and sniffed the air with minute nods of his head.  Patrick held the leash, but instead of watching Cosmo, his head remained turned to the right to look down the sidewalk.

Then something strange happened.  The man hunched forward and walked that way for a few steps.  Then he dropped forward until he was down on all fours.

My God, is that some kind of … monkey? Patrick thought.

It did not look quite like a monkey — but then, it did not quite look like a man on all fours, either.

It was moving faster.  A lot faster.

Cosmo growled, and his growl became more intense as the figure neared.

Patrick felt a shudder of fear of the unknown, because he didn’t know what he was seeing.  Whatever it was, it was getting closer, and it was bigger than Patrick first had thought.  A lot bigger.