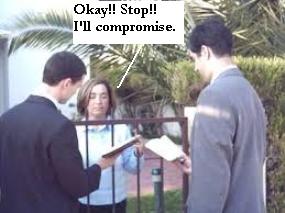 Just tell me we haven’t all been here:

A guy in Arkansas recently answered his door and encountered a pair of Jehovah’s Witnesses. The two women persisted with their futile efforts at conversion until the guy got angry and barked “I moved out here to get away from people like you!”

As the women drove away, the guy wanted to make sure that they wouldn’t return. So he got his gun and fired it nineteen times, thereby ensuring himself a spot in the news.

I feel for the players in this saga. The missionaries no-doubt believed they were actually bringing something of value, while the felony charge the guy received will likely lead to a future job doing oil changes. But I can understand his frustration – after a similar event at my former residence in Portland, I started dropping to the floor and crawling into the bedroom whenever the doorbell rang unexpectedly.

But this episode gave me an idea on how to end the budget standoff in Washington. The Democrats should hire an army of Jehovah’s Witnesses to approach the Tea Party Republicans. They could hit their homes, their apartments in DC, and their offices non-stop for a solid week. And then start in on the homes of  friends and relatives.

After seven days of utter torment, John Boehner would call up Harry Reid and say “Okay, my people are ready to be reasonable, just call off the dogs!”

Nobody can stand up to that kind of pressure. This could totally work.

3 thoughts on “Learning To Compromise, The Hard Way”