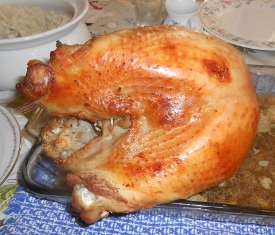 If not already done, thaw turkey breast. Keep turkey in packaging and add it to a large pot. Cover turkey with cold water. Let turkey sit in cold water for 30 minutes per pound. In this recipe, that would be 4 hours. Pour out water.

Remove turkey from brine and pat dry. Preheat oven to 400 degrees. Put turkey in large pan Melt butter. Brush melted butter onto turkey. Sprinkle pepper and salt onto turkey. Place wire rack in pan. Put turkey on rack. Put meat thermometer in thickest part of turkey. Bake at 400 degrees for 20 minutes. Reduce heat to 325 degrees. Bake for 2-to-3 hours or until meat thermometer reads 165 degrees. Baste with ½ cup of chicken broth after every 30 minutes of baking at 325 degrees.

3) All turkeys have periscopic vision. This means they can twist their heads around to see everything.
Can human ninjas do that? I think not.

4) Female turkeys do not gobble. This stealthiness makes them the perfect silent warriors.

5) Our founding father, Benjamin Franklin, wanted to make the turkey our national bird.

6) Why? Culinary historians suspect that turkey ninjas fought on the colonists’ side during the American Revolution.

7) How do they know this? The British soldiers were far better trained than the American militia. The British king had many more soldiers under his autocratic command than did our fractious Continental Congress. King George’s army possessed a lot more cannon and could boast of the biggest and best navy in the world.

8) America could only have won if it had ninja turkeys swooping down, dealing quick, silent death out of the pitch-black night. Historians think American units coordinated ambushes by using bird calls. Culinary historians know better. These were turkey calls, made by fierce turkey warriors.

9) Britain finally countered with the King’s Bear Battalion in 1782. These bears could climb up any tree and were paid in honey. America’s ninja turkeys wouldn’t have stood a chance against the bears’ great strength and massive, sharp claws.

10) Fortunately for America, Britain’s will to continue the war had already been shattered by the decisive battle of Yorktown during the previous year.

12) America might be using turkey ninjas in covert operations. Why can say? Washington remains mute on the subject.