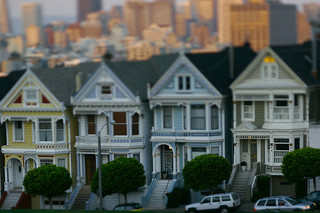 Who doesn’t love a good sitcom about 3 dudes living with 3 young girls?  It’s such a relatable premise, which is probably why “Full House” was such a successful show.

I used to think Uncle Joey was the creepy one, living in the basement with stuffed animals and children’s toys, but now that I think about it, at least he had his own space.

Uncle Joey’s gig was actually better than Uncle Jesse’s.   Jesse had no privacy living upstairs, just a bedroom away from enough make-up and estrogen to make any tranny jealous.

Do herpes smell?  I don’t know.

For some reason, I got to thinking about what the neighbors must have thought of that bat shit crazy house.

Fortunately, I found a diary entry from one of the Tanner’s neighbors, and since I’m awesome like that, I decided to share the notes with you.

That’s all the notes I found from the neighbors.  Apparently their house was torn down after the show ended, which isn’t really that sad as it was just the front of a building and not a full house anyway.

Now, if you’ll excuse me, I’m off to watch reruns of “Family Matters” and answer the question about why Urkel talked in a high-pitched voice.  (Spoiler alert:  His pants where shoved up his scrotum.)