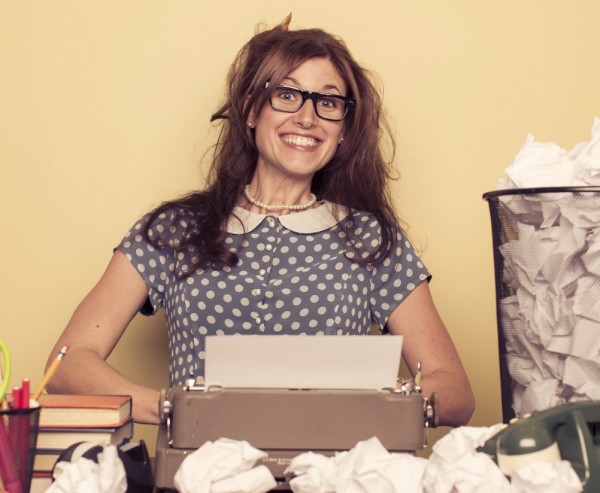 Where else is a humor writer going to find a better wealth of potential laughs than his/her own life? Nobody knows your life better than you do, because you’re the one who has been inside it all these years.

If your life is boring, you can always make things up. This is one of the few instances where telling a lie is not only not a sin, it’s a virtue.

a) “My kid drives me crazy. He’s always into mischief.”

b) ” My kid must have been switched at birth with Damien. He’s only five years old and already he’s destroying the world, starting with our house.”

If you want to get even closer to home and poke fun of yourself, compare these two lines:

a) “I gained weight. I can’t fit into last year’s clothes.”

b) “I’ve gotten so fat over the last few years that my closet contains clothing of four different sizes — five, actually. Sometimes I buy one size up, for the future, just in case.”

The big danger in using self-deprecating humor, either orally or in print, is that there are always People Who Just Don’t Get It. This includes those who see your exaggerated or made-up statements as an opportunity to come up with caustic comments, sympathy or unsolicited advice, all of which are equally maddening to the recipient. Take, as an example, the line above about the weight gain and the clothing sizes. Explaining to these people that you were making a joke will only elicit responses such as:

a) “You shouldn’t make fun of things like that. There are poor people all over the world who would love to be able to afford diet food.”

b) A nervous giggle, and “I should have known.”

c) “Well, you really are too fat. You need to go on the Cumquat Diet. It worked for my cousin Al.”

Being an essentially kind hearted person, I have no advice about how to deal with those people. If I were not so kind hearted, I would probably say something like, “I know. Your cousin Al looks like a cumquat,” or “Please tell me how I can donate all the diet food in America to Third World countries.” I won’t, though. Sad.

The King of Self-Deprecating Humor has to be Cyrano de Bergerac, in the play of the same name by Edmond Rostand. In Act I, when an idiot provokes Cyrano by telling him he has a big nose, he responds by coming up with a whole slew of wittier ways that the guy could have said that, including comparing his nose to a bird’s perch, a peninsula, an inkpot, and a few other imaginative things, as well as making some very humorous suggestions of what could be done with such a facial appendage. He does a magnificent job of one-upmanship on himself.

The Cyrano de Bergerac Technique of Improvisational Comedy should be used with caution, however. All it does for Cyrano is get him into a huge fight, and his opponent, who dislikes being made to look like an ass, is somewhat better with a sword than he is with words. Cyrano has to work hard, including throwing his opponent’s timing and concentration to the winds by improvising poetry while simultaneously kicking the guy’s butt. This is proof positive that being funny is a useful skill to have in an emergency, including one that you have brought on yourself.

However, it is considered safe to use self-deprecating wit if nobody is ready to pulverize you for doing it. This includes literary endeavors. Nobody got into sword fights with James Thurber after he wrote My Life and Hard Times and he put plenty of self-deprecating humor in it, as well as the foibles of some colorful relatives. Instead, there is a prize named after him.*

The irony about self-deprecating humor is that you can say things about yourself that you never want anyone else to say to you. Cyrano can joke about his nose, but if anyone else makes a joke to HIM about it … well, this is the guy who can simultaneously wield a sword and improvise rhymes. You don’t want to get on his bad side.

Jackie Gleason allowed all those fat jokes on The Honeymooners because he was a comic actor and the jokes were funny. In real life, he was very sensitive about his weight and not ready to laugh at anyone other than himself who made reference to it.

Self-deprecating humor is a pretty good psychological defense mechanism. It’s a way to bring a kind of perspective to painful things, so that they don’t seem so bad. It’s also a way to get people to laugh with you, rather than at you. The fact that, most of the time, people aren’t even thinking of laughing at us is beside the point. Getting them to laugh at something because we want them to laugh is a real high. In fact, it feels damn good, and it makes us feel powerful.

So if, like Rodney Dangerfield, you get no respect, don’t drown yourself in sorrow or punch people out. Make funny stories about it instead.

And learn how to write. Oh, but that’s a whole other story.

*This gives humor writers something to aim for. Let’s face it. Those of us whose literary concentration is coming up with the funniest stuff are not going to win Pulitzers.

8 thoughts on “How to Write Funny: Self-Deprecating Humor”