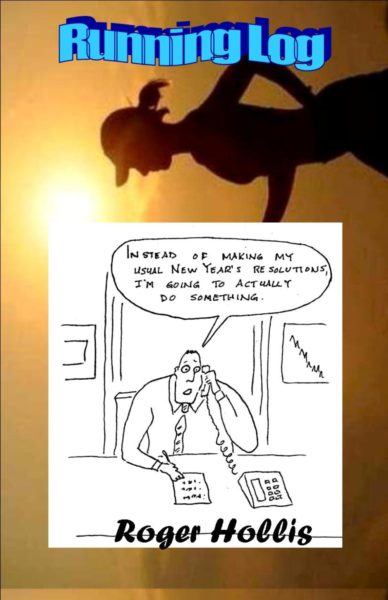 Today is launch day for the funny and encouraging book entitled Running Log  by teacher, veteran, cartoonist and all around good guy Roger Hollis. If you are thinking about running or an experienced runner, you will enjoy this fun work.  It will keep those running shoes moving! Running Log is available on Amazon and we will have Roger out there talking about this book soon as well. 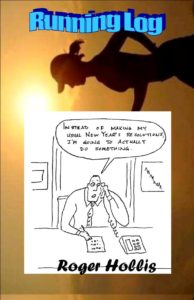 Book description: Whether you’re a beginner, a long time runner, run just for fun and exercise or are an ardent racer, we all have a variety of “tools” we use to keep us motivated. One of my long time “tools” is a training log. I’ve got dozens that I have filled in over the years. I still keep them (I’m not sure I know why?) They are my guides to tracking the miles I log to reach my annual goal.

While this training log provides you with a weekly summary of your progress, I’ve added a little whimsy for each week in the form of a cartoon to perhaps keep you motivated but also, hopefully, to add a small chuckle to your day. 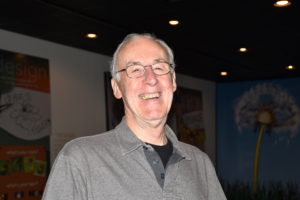 Tell us about Roger Hollis

I was born in Welland, Ontario, Canada and spent most of my childhood living on farms running around the farmyard and the woods like boys back then usually did.

We moved to upstate NY in the Adirondacks when I was 13, played on the track team and hockey team in High School. We practiced on an outdoor rink in the middle of winter; guys had to be tough back then!

Worked my way through college, something you could do back then. Eventually, I got a four-year degree in teaching. Tried out for the track team but got hurt in the pre-season. Shin splints are no fun. I joined the Air Force in 65. Graduated top of my class in school and learned that all of my hard work resulted in “advanced training, whoopee. So, I ended up as a navigator on B52’s with two tours of duty, 150 combat missions and a DFC. I did no running there as it is too hot and humid in Guam and Thailand!

Left the service in 1970 and went to work at Yosemite National Park where I met my wife. I spent two summers working there, hiking the backcountry. Beautiful area but a little too remote for us so we ended up back in NY State. I guess everyone goes home again at some time or another.

I worked in Engineering and Operations at a small company in Watertown, NY where our sons were born, one in 76 and one in 78, and then moved to Tennessee to do a start up and then moved to Kent, OH. I was quite fortunate in that my wife had no qualms about moving wherever the opportunities took me. She’s been a rock!

A number of my co workers wanted to start running on the days we didn’t play racquetball. Sounded good to me so I jumped in the first day and ran 2 miles. Damned near thought I was going to die! Hadn’t done any training, didn’t work up to, but learned a good lesson. That was back in the mid 80’s and been running roads and trails ever since.

When I moved to Arkansas and took a job as VP of Sales I was on the road quite a bit so I got in the habit of packing my running gear for each trip. I would get up at 5:30, go for a three-mile run, take a shower, eat breakfast and then be ready for a full day making sales calls. I’ve run roads and trails probably in more of half the states and the province of Ontario. It was (and still is) a great way to stay in shape since the rest of my day was usually either sitting in a car, sitting in someone’s office, sitting in an airport or sitting in an airplane. I highly recommend the approach for anyone who travels a lot.

We moved back to Ohio in 2002 and then when the corporate world got tired of me and kicked me out I became self employed as a Business Consultant and have been primarily in that role ever since. The beauty of that move was the opportunity it gave me to become more involved with our local community, something I had no time for in my Sales role. I’ve joined a number of networking groups, did volunteer work for a local Community Job Club and still volunteer for the Akron Marathon Series.

We’re fortunate here in NE Ohio to have a plethora of running trails and a vibrant running community. All things considered, I hope to continue to take advantage of them for the next 25 years!

How did you get started running?

Well, with tongue in cheek, I would rephrase the questions to “How did I get started running again.” Bear in mind that evolution had fitted us for running once we climbed down out of the trees. Those that learned to run could catch food to eat and escape getting eaten, those that didn’t, didn’t survive. So, homo sapiens start life knowing how to run, just watch the little kids the next time you go to a park, they’ve already started running. Then we stick them in school and make them sit and, as they progress into the business world, we stick them in a cubicle and make them sit all day. They forget how to run.

So, I started running again when my sons started beating me around the yard and skating on the hockey rink. Then, as noted above, a few of us at work started running the roads in the mid 80’s and I’ve been at it since then. So, since then, on a regular basis, 30+ years and thousands of miles.

My weekly goal is at least 5 days a week, 15-18 miles total. My annual goal is 800+ miles and at least 2 charity racers. I run primarily to stay in shape and stay healthy, not much into competitive racing any longer although it feels good when I can still place within the top 3 in my age group! (Less frequently these days I’m sorry to say).

What made you decide to do the running log?

As previously mentioned, after leaving my corporate gig in 2011 I decided to become more involved in the local community and joined a number of networking groups. In one of those groups I met two individuals who owned a small training business. In 2012 they started a monthly online digital magazine and mentioned that they were looking for someone to add a cartoon relative to their monthly theme. I volunteered and over the course of 50 editions provided all of their illustrations. Not surprisingly, many of the illustrations I did had running figures in the theme of the month. Subsequently, they published a book, out last March called 1000 ways in 1000 days that I did the illustrations for. It’s available on Amazon. After the magazine was cancelled I was trying to figure what to do with all of the illustrations I had prepared over the past 4+ years and decided that adding a running cartoon to a running log might be of interest. So, I worked on additional cartoons until I had enough to cover an entire year and this was the result.

What do you want readers to take away from the book?

Most, if not all, serious runners keep track of their individual efforts, primarily for motivation and a way to keep track of reaching their personal goals, whatever they may be. So, in addition to a motivation tool, I thought adding a little humor would a nice touch, especially after a long hard workout. It would add a smile when logging the day’s activity.

What is the inspiration behind this book?

Hmmm, good question. I think that at this stage in my life my inspiration is to out run Father Time. Yes, I know, in the long run, I won’t win, but I want to extend the time as much as possible. Empirical data shows that a person who exercises regularly, eats properly and sleeps 7-9 hours a night can have a biological age of 10+ years less than their chronological age. My goal is to run a 5K at age 100 and place within the top three of my age group {grin}.

For those new to running I would say congratulations. Keep up the effort. There will be good days and bad days but regardless of time and distance, any run is a good run.

In the immortal words of John “The Penguin” Bingham, “The miracle isn’t that I finished, the miracle is that I had the courage to start”.