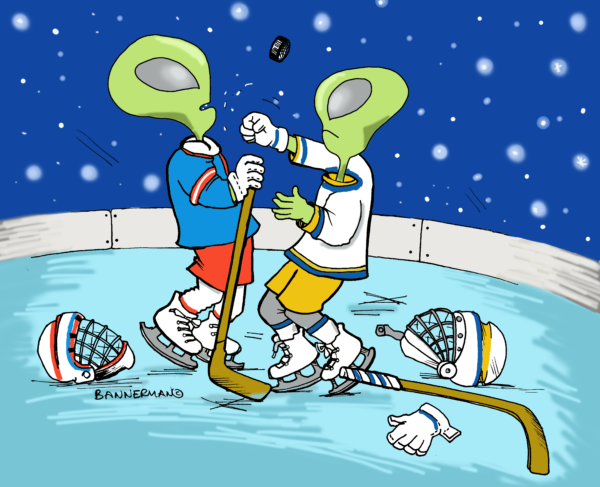 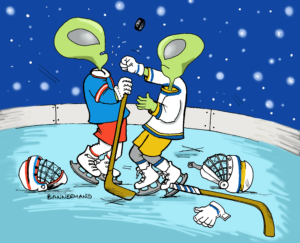 It’s a two-mile-long, flat plane of ice floating in the Weddell Sea off Antarctica, shaped like a perfect rectangle. And so big it contains enough water to fill every swimming pool in California several times over.

It’s a tabular iceberg, broken off from the Ross Ice Shelf. Scientists, who think they know everything, say that such a shape—perfectly even on the top with 130-foot high sides that look like they were cut with a band saw—is natural and explained by something they call “physics.” I have another theory, unencumbered by fact: it is an ice rink used by giant aliens to play hockey.

I put this theory forward not to create a sensation or become fabulously wealthy, like Erik von Däniken, the author of Chariots of the Gods?, which has sold over 70 million copies. But publishers, let’s talk.

Von Däniken argues that humanity has been visited by extraterrestrial visitors for thousands of years, providing us with their wisdom. And what a wonderful job they’ve done, helping us create the wheel, the pyramids, Netflix, EZ Pass, Pringles, all of them advancing civilization by leaps and bounds.

The pictures of the iceberg were taken by a NASA research plane, and if you look very, very closely, and squint, you may see what appears to be a giant alien Zamboni, probably brought here from another galaxy that gets NHL games as part of their cable package. Not having water on their planet, the aliens had to travel to Earth, and their great size made the giant Antarctic ‘bergs the perfect venue. They play in the darkness of the polar night, with night vision goggles, explaining why there is no photographic evidence.

These are theories I intend to explore in Zambonis of the Gods?, an evidence-free look at these unsolved mysteries, which deserve greater understanding, government funding, and a cable TV series with a concerned-sounding narrator raising questions like, “Has Bobby Orr been contacted by the aliens to play on one of their teams?” I don’t doubt that he has—aliens are intelligent, as we have seen time and time again in movies.

Could the Zamboni be a stunt by the Zamboni company to get publicity? No, I don’t think so. The Zamboni’s presence on the iceberg is more, how to put this, theoretical in nature, which is why I have put a question mark in the title. It could be there, it’s just hard to prove it, except by bravely claiming it is there, like that book on advertising’s “hidden persuaders” that hid the persuaders so well it turned out they didn’t exist. It sold a million copies. Perhaps the Zamboni is subliminal, that’s why you can’t see it.

The photo NASA took of Bobby Orr on the iceberg waving back at them, however, that’s as real as it gets. I will dedicate the book to him.

4 thoughts on “Zambonis of the Gods?”