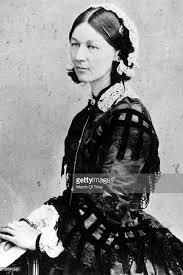 As she lay upon her sofa, gasping, Florence Nightingale devoured blue-books, dictated letters, and, in the intervals of her palpitations, cracked her febrile jokes.

Thank you, thank you . . . thanks a lot!  Wow, you guys are on fire tonight!  Must be diphtheria or something going around.

Hey, great to be back in London.  I just flew in from Scutari, Albania . . . and boy are my arms tired!

You know Scutari’s not a bad place if you’re an Ottoman–but who wants to be a crummy footstool? 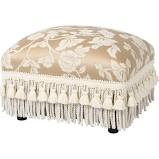 But seriously folks:  You know, the Crimean War is a real mess, and we ought to pull our troops out of there!

But at the same time, let’s give it up for our fighting men in that God-forsaken hell hole.

Never want to offend anybody . . . unintentionally.

People ask me–what was it like being the only woman tending to the entire British army.  And I say–it’s nice to have 200,000 men to choose from. 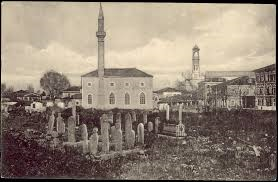 I mean, until the internet is invented, I’ll have to make do with the one or two guys without wedding rings I meet in fern bars.

Can you believe it?  I come up with the most useful abbreviation in, like, the history of the world, and all anybody remembers is I saved a couple of thousand crummy lives. 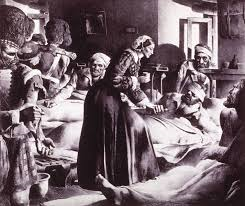 Yep.  The first 19th century female to perform there while lying down–outside of a bordello.

You know, a lot of female comics make jokes about how dirty and disgusting men are, but listen, they’ve never seen filth like I saw in the hospital when I got there.  It wasn’t hard getting men out of the trenches to fight.  They had a better chance of living charging into a bayonet than they would in the infirmary!

Listen, you’ve been a great audience.  I’ll be here all week!  Be sure and tip your waitresses–and try the chevapchichi!