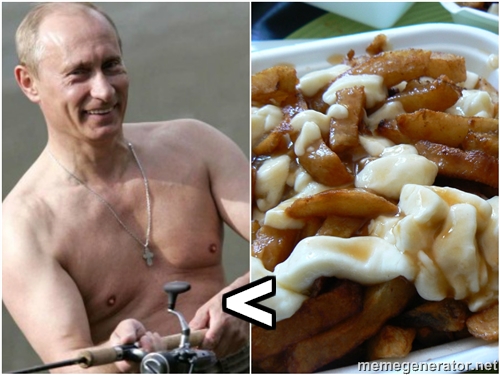 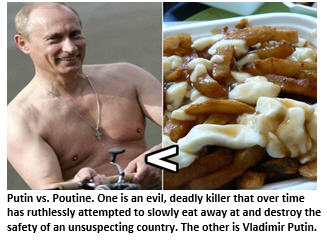 Every day I read another news story citing Russia’s ongoing attempts to de-stabilize America. And then there’s the increasing specter from China, with its treacherous plans to steal all our technology and hack all our phones.

We’re also told to be wary of the menace from our southern border, where thousands of terrorist Hispanic children with their Hello Kitty backpacks are preparing to invade us.

As serious as these threats are from our east, west and south, our government, in its futile efforts to protect the American people, is looking in all the wrong directions. The real peril – and it is a formidable one – is coming at us from the north!

I’m talking about the People’s Socialist Republic of Canada. I have always distrusted Canadians – especially this one particularly beautiful redhead “comrade” I have long suspected of being a spy – my wife. And seriously, how can any country be that nice?

It’s not the Russian Bear we should be worried about. It’s the great white Polar Bear lurching towards our 5,525 mile-long unprotected northern border. Canada may not have the military clout to conquer us (their entire military could fit into a Walmart Super Store). No, their tactic is far more devious and subtle. You’ve heard the adage, “The way to a man’s heart is through his stomach”? Well, through the stomach is also the way to our demise – and it is how they plan to kill us.

How do I know this? Because I recently visited a Canadian family in Vancouver, BC. We took walks together, chatting about the challenges of living in a northerly country with only four hours of sunlight on a good day. We pondered whether Canadians will ever learn how to spell words like “color” and “theater” properly. We laughed. We bonded.  I thought they were my friends. They even forgave me for living in a country that elected a president who thinks Canada’s capitol is the North Pole. (Every American knows Canada’s capitol is Toronto.)

The entire time I was in this perplexing alien land, folks were extremely polite and hospitable. My guard was down, and so they lulled me into a false sense of acceptance – and trust. Too late, I learned that secretly, they all despise Americans. Why? Perhaps they envy our ingenuity in creating Disneyland and the diaper alarm. Or maybe their shame over our women’s hockey team beating theirs for the 2018 Olympic Gold medal was too much. The truth is, I now believe my hosts were trying to kill me the entire time, and I have definitive proof.

On my final day there, my Canadian “friends” took me out to a popular local eatery for a last meal before I headed back home to the states. The specialty was a popular traditional Canadian meal called poutine (“poo-teen”) and they insisted I try it. I had no idea they intended this to literally be my LAST MEAL.

I know, you’re saying, “Tim, you sound paranoid!” But let me explain. This meal was created by the most dangerous specie of Canadian: the French Canadians – and is composed of greasy French fried potatoes mixed with large chunks of cheese curds, smothered in a thick blanket of beef gravy – or as it’s better known, the Three Pillars of Death. The portions are huge. The “Child Size” is so named, I believe, because it’s roughly the size of a toddler. My theory is that poutine was originally used as a substitute for mortar to adhere the ice blocks together on igloos.

Flashback to the cozy scene at the restaurant. Within minutes of gorging on this lard-based sludge with the consistency of wet cement, I could barely stand up. My dinner-mates were ever so solicitous as they ushered me into my car and bid me a fond farewell. I could hardly stay awake on the three-hour drive home. I could have died in a car crash – which in retrospect, clearly was their plan all along. 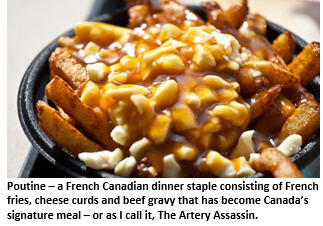 In doing research for this article (why are you laughing at the thought I might do research?), I learned that poutine is insanely high in saturated fat, cholesterol, and refined carbs, and causes instantaneous thickening of artery walls. In fact, a single serving (typically 5,000 ounces) can kill you (although in full disclosure, that’s more likely due to the waiter deliberately dropping the ponderous plate onto your head at the sound of your American accent.)

Fortunately, for me, I only ate a small portion of my 64-ounce “Infant” serving, or else, I’m fairly certain I would have suffered a heart attack – or at least a really bad case of indigestion.

What the mainstream media won’t tell you is that it’s all part of a nefarious plot to invite Americans to come to Canada, to help prop up their faltering economy, and then, when we least suspect it, serve us a truck-bed serving of poutine, so we’ll all keel over from cardiac arrest. Then they’ll take our cars, break into our homes –and steal our flat screen TVs and jewelry – while leaving a very thoughtful apology note on the kitchen counter.

I now believe Canadians are hellbent on destroying America. They have long been jealous of us, mainly because they are sick and tired of the NFL drafting all the best football talent before the CFL gets a pick. Their plan is to take us out, one unsuspecting football fan at a time, by offering to make us home-cooked meals of their artery-clogging poison.

You may be asking yourself, “Hey, if poutine is so deadly, why do Canadians keep eating it, and why aren’t they dying from it?” – to which I say: you ask really annoying questions. You’re forgetting that they’ve had a century to build up an immunity to this deadly concoction. They also drink maple syrup straight from the jar and consume Canadian bacon by the shovel-full, and yet somehow survive. Those bastards have arteries of steel.

America, it’s time to stop falling for all the Fake News stories about Russia, China and Mexico trying to undermine our great country. Our real enemy will be invading from the north. And they know the fastest way to bring us to our knees is through our pie holes.

Tonight, when you tuck your kids in bed, tell them you love them, promise never to make them write everything in two languages, and be sure never to let them visit Canada. Because if they do, they may never return, thanks to a poutine overdose – or perhaps because they will be duped by Canadians’ devious displays of hospitality, generosity and the country’s incredible natural beauty. Don’t say you weren’t warned.