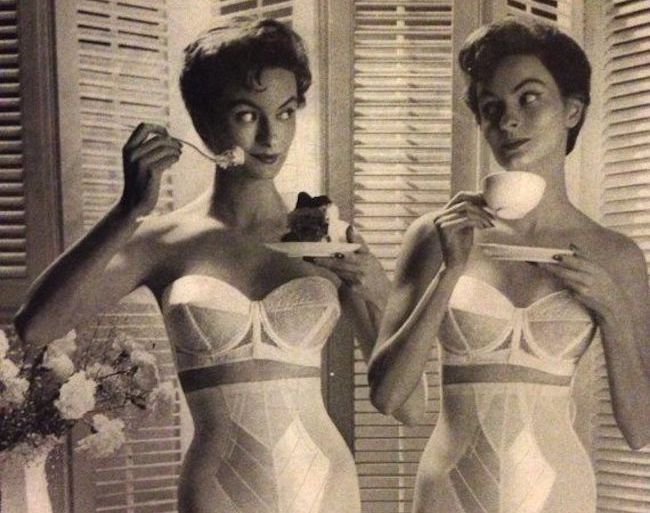 ‘Tis the season to over-indulge, true. But, ’tis, alas, also the season to sequin, shimmy, and shake – all of which challenge chubby, out-of-shape, middle-aged me.

And while I can still wedge myself into my holiday clothes, do I look cute? Hardly. I more resemble that lump of coal Santa leaves children who have been naughty, not nice than I do some hot party babe.

So, sadly I’m giving myself a Spanx-ing.

You know what I mean, ladies. I’m stocking up on multiple pairs of those ubiquitous boa-and-breath-constricting toe-less undergarments that women are wont, but not wanting, to wear these days.

I tried Spanx once before but almost wound up in the hospital. My first venture into the S&M world of Spanx-ing occurred in the dressing room of a fashionable Fifth Avenue department store several years back – and my back has never been the same!

After much yanking and pulling and torso-contorting worthy of a professional contortionist, I finally had the contraption up and about. Then, the real trouble set in. My circulation was constricted. I had trouble breathing, and to make matters worse, I looked ridiculous. I thought I’d have to call 911 for help. Fortunately, a kind saleslady, undoubtedly used to Spanx-induced panic attacks, came to my rescue, extracting me from that vulcanized instrument of pain and shame.

Why is Spanx so popular? Why is it so uncomfortable? And why, in this liberated era of women loving our inner beauty, are we subjecting our outer bodies to this sweaty bondage?

In the 1990s,  women threw away dresses and skirts, stockings, and pantyhose in favor of pants. But somehow, they didn’t reject the need for a streamlined, jiggle-free profile.

Spanx was created with $5,000 by 27-year-old door-to-door fax machine saleswoman Sara Blakely. In 2000, the first year of the company’s existence, Blakely recruited friends to fill orders out of her Atlanta apartment and generated $8 million in retail sales.

And from there, it was a short walk to the Red Carpet! Soon celebs brazenly started admitting they were wearing Spanx, so that gave us mere mortal Mabels and Madges inspiration to get Spanx-ing too.

As for Blakely? In 2012, Forbes Magazine named her the world’s youngest self-made female billionaire. It just goes to show you, one woman’s pain is another’s gain! Of course, make that one bazillion women’s pain!

Today Spanx is so much more than toe-less pantyhose. The company makes leggings and tops and something called “arm tights.” I’m not 100% sure what they’re for. At first, I thought they were compression bands – i.e. girdles for flabby arms. Spanx describes these “layering pieces” as a “wardrobe game-changer.” As I said, I don’t know what they’re for.

While still true to its core compression/constriction market of pudgy middle-aged moms and grandmoms, Spanx is also setting its sales sights on younger gals offering fishnet floral tights, “destroyed” tummy shaping tights (which refers to the pattern, not your belly after having a couple of kids), lightning bolt tights, and metallic shimmer tights.

And don’t get me started on Spanx sizing. A’s and B’s are for small sizes, you know, women who really don’t need Spanx. C’s and D’s, the BAD GRADES, are for us big, bad girls. I think the sizing should be reversed. We larger ladies need all the positive reinforcement we can get!

Oh, well. What can I say? When it comes to holiday eating, I have been decidedly naughty. Tonight, Handsome Hubby and I are going out to a fancy do. Time to get Spanx-ed. I’d better grab my phone and pre-dial 911 just in case something goes wrong! I wonder what the police scanner code is for a Spanx-related injury is? Maybe it’s just hysterical laughter?

Holiday Gift-giving Tip: Ladies, men can get Spanx-ed too! The company makes body-shaping undergarments for guys. Just right for the big boys on your gift list, at least the ones who have been naughty!

2 thoughts on “I’ve Been Naughty. Now I’m Getting Spanx-ed”