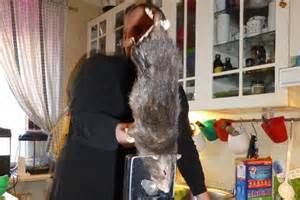 A family in Sweden is celebrating the death of a monster rat that terrorized their home. The 16-inch, 2.5-pound rodent broke into the house via the ventilation and heating system and set up squatter rights in the kitchen. This bold invasion was no easy feat. The rat had to eat through concrete and wood before getting to the interior vents.  While the family appreciates the rat’s tenacity, the family cat was less impressed.  Once the giant rat made its presence known, the cat became a no show abandoning its keen rodent hunting instincts for a safe haven behind the sofa.

Weeks into the family’s traumatic ordeal, the rat died after falling prey to an exterminator’s trap. The family has since enjoyed showing off the carcass to friends, neighbors and the media. The dad’s only regret is that his kids were so traumatized by the mammoth-sized creature that they refused to touch it for fear it would come back to life as a zombie.

Yep. A zombie.  Let’s make this clear. The children had no fear of contracting Bubonic Plague or flesh eating disease bacteria or anything life threatening rats might actually carry. Nope, they were afraid that the rat would become a zombie.  Can someone please tell me when zombies became such a big part of the human experience? Hey, I get the entertainment value of these lovable living-dead creatures, but if I were going to adopt a living-dead belief, I would gravitate toward vampires because they possess more attractive attributes: First, they have all their flesh even when they turn themselves into a bat or wolf.  I know it sounds prejudiced (and maybe this a zombie racist issue), but I like a living-dead man with a good amount of flesh. I am definitely not attracted to oozing sores and missing skin layers.

Another advantage to vampires: They possess a powerful presence. They have perfect posture and walk and fly with grace. They hypnotize people to come to them and then they get their victims to do their will. Zombies just make people run away, and as far as physical presence goes, zombies possess none. Even the best of zombies can’t walk upright. They lurch around with their arms swinging by their sides. They look like drop outs of chimpanzee acting school.

And finally, vampires always seem to have money and real estate. The best vampires own mortgage-free castles in Europe that come with royalty titles and servants.  What do zombies have?  A patch of grass in the woods or maybe an abandoned hut which they share with 300 other zombies. In other words, they are homeless.

I guess when it comes down to it, the Swedish kids were right. I wouldn’t touch the dead rat if there were a chance it could be a zombie, but if it could turn into a rich vampire with real estate—possibly beachfront, I could think about it.

16 thoughts on “Zombies Vs. Vampires – Who Is Your Dream Catch ?”