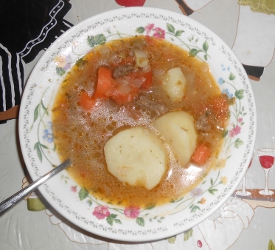 1) Uzbek is an anagram for bezku.

2) Kudzu is an extremely fast growing vine that’s spreading all over parts of the southern United States.

3) Bezku is a fast growing beet that’s growing all over Uzbekistan.

4) For the longest time, the Turkmen government was aghast about the proliferating bezku.

5) Then came last month’s announcement that Beetball would be added as a sport for the Summer Olympics. Now athletes all over the world are clamoring for beets.

6) Beetball is played very much like volleyball but with a beet instead of a volleyball. So, tough agile hands are a must for the successful participant.

7) Oh, also good eyesight, excellent eyesight, superb eyesight. You really don’t want to get hit in the nose by a beet hurtling toward you at 80 miles per hour, because you didn’t spot it in time.

8) The best beetball players hail from Mongolia. Genghis Khan trained his warriors to dodge arrows by hurling beets at them. Sure, he could have trained his fighters by loosing arrows at them, but men with arrows in their heads or heads invariably prove to be slow learners.

9) That reminds me, the phrase, “That beats all,” really came from “That beets all,” and is a deadly serious statement. Nothing beats beets for tough army training.

10) Genghis Khan and the succeeding khans of Mongolia nearly conquered Europe in 1241. No European army could withstand the Mongols. The Mongol horsemen, toughened by months of beet throwing, easily dodged the arrows of Russian, Hungarian, and Polish archers.

11) It looked really grim for the nascent French pastry industry.

12) Then suddenly in 1242, the fiercesome, all conquering Mongol armies withdrew to Mongolia. Their khan, Ogadai, had tied and the Mongols true to their tradition, had returned to their homeland to elect a new leader. How did Ogadai die?

14) Well, Sven Svenson of Sweden poisoned the Mongol leader with lutefisk. Sven knew that just as no Western army could stand up to the Terror of the East, no man could survive eating lutefisk, or even smelling and looking at it. Apparently though, Sven was okay with run-on sentences.

15) Indeed, lutefisk warfare is the primary reason the tiny Viking armies consistently overwhelmed the much larger armies of Ireland, England, France, and Germany. We hear the expression, “God save us from the fury of the Norsemen,” but it used to be, “God saves us from the horror of lutefisk.”

16) Anyway, Svenson was decapitated by the Mongols, which certainly was a bummer for Sven.

17) The United States and the European Union still permit the making and even the selling of lutefisk to adults and innocent children. Why? Why? Because we all know how lutefisk saved Western civilization in 1241. There is even the suspicion that Western armies maintain vast stockpiles of lutefisk, but no one will talk.