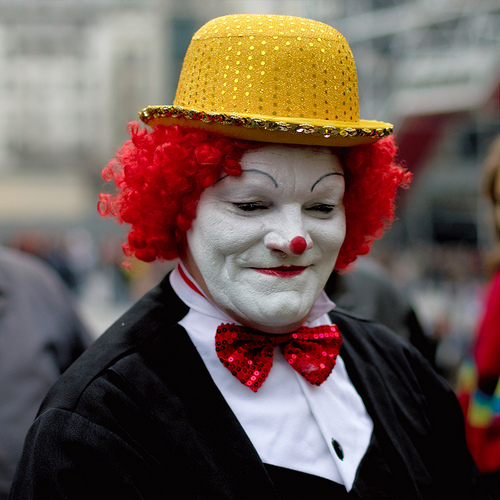 Remember when clowns were friendly? There was Bozo and Ronald McDonald. There were circus clowns who drove around in little cars and made people laugh. But those clowns gave way to some not so nice clowns such as Stephen King’s Pennywise from the book It, who was responsible for the development of Coulrophobia or an abnormal fear of clowns in so many readers and moviegoers in the 1980s and 90s.

While the fear of clowns did become mainstream,  the threat of clowns seemed to ease a bit until this year when clowns mysteriously began appearing on sides of roads in several states. These frightening figures had only one goal in mind and that was to scare the crap out of motorists and pedestrians who spotted them lurking. Then, some of these painted purveyors of peril turned violent as well and once again and rightly so, the fear of clowns hit everyone—well almost everyone.

Anyway, this interest in…what should I call them…sex clowns?…well, this got me thinking and so I called up several friends. Three of my friends were pretty normal when it comes to life, but the other two (and they admit this themselves) tend to live on the not so normal or adventurous side of the street. I asked them to take part in my totally unscientific survey so I could determine what exactly people find attractive about clowns in an “intimate” setting or as I put it, “Why would clowns turn you on?”

Here are the answers that I can share with you without losing all the third-party ads on my site due to bad content.

There you have it. The totally unscientific and somewhat bizarre reasons behind why clowns are once again in demand. YUK!

8 thoughts on “Send in the Clowns?”