Inspired by a takeout dinner of fettuccine alla primavera

Forget Luciano Pavarotti, Andrea Bocelli and Josh Groban. When it comes to Italian and Neapolitan songs, you don’t have to look any farther than me. 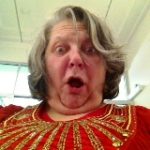 I know what you’re thinking, and yes, I am a female and no, I am not a tenor. Contrary to popular belief, being a tenor is not a requirement for singing Italian and Neapolitan songs. Being able to sing is a requirement, preferably with a voice that is not painful to listeners.

There are Italians who can’t sing, but there are so many who can sing that most of the world thinks all Italians can sing. We prefer to leave non-Italians to their illusions in this matter because this particular stereotype can be good promotional material, especially for those of us who sing professionally or own restaurants. There are many Italians who have done other things with their lives that have nothing to do with singing. We are grateful to Guglielmo Marconi for inventing the radio, to Antonio Meucci for inventing a telephone about 5 years before Alexander Graham Bell got to it and to Leonardo da Vinci for inventing a bunch of things that don’t work but do show what a genius he was. I won’t mention Napoleon Bonaparte. He started out Italian, but ended up French, which is okay with the Italians because they don’t want him, anyway.

I have a pretty large repertoire of Italian and Neapolitan songs and, like most singers, I love to show off. Most of the time I do this in socially acceptable ways, such as in front of an audience that is expecting it. On the other hand, consider this a warning to anyone contemplating knowing me. I might burst out in O Sole Mio or Volare at any of the following times:

1. While waiting to be seated in an Italian restaurant. I did this once. Really. Nobody asked me to sing. It was not that kind of restaurant. The people I was with wanted to kill me first, then hide. I was singing pretty well, too. Some people just don’t appreciate my efforts to bring joy to their lives.

2. In my apartment. This is safe, as long as I don’t have to deal with angry neighbors descending on me with torches and pitchforks.

3. On the street. See No. 1, above. If I am with people at the time, they will probably speed up and pretend they don’t know me. In that case, I can stand there, sing and let people give me money. I haven’t tried this yet, but there is a first time for everything.

Neapolitan songs are especially fun to sing. They are Neapolitan because (1) they were composed by guys from the Naples area and (2) they are in Neapolitan dialect. For those of us who studied and try to speak standard Italian, this is a challenge. Neapolitan dialect is to Italian what Jamaican Patois is to English. If you have ever heard Jamaican Patois, you know what I mean. Only a real Neapolitan can sing that dialect right. The rest of us can only do the best we can with it. We don’t care. We sing it anyway because, as I said, those songs are great fun, even if you are embarrassing your companions in public.

7 thoughts on “The Voice, Italian Style”