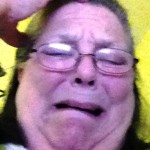 There are nomads who haven’t moved as much as I have. You’d think I’d be used to it by now. Forget about it. Just mention the word “move” and my brain goes into overload, and then crashes in a system-wide breakdown, including sweating, tremors and running in circles, screaming.

I just moved again, for the seventh or eighth time since returning to New York in 1982. This time it was into an inexpensive, partially-subsidized co-op for middle-income people, in a nice building just up the street. I won’t have to leave the neighborhood, and I can probably live there until I die or go into a nursing home, whichever comes first. It was an offer I couldn’t refuse, after spending a couple of years on a waiting list and fighting like a mother tiger protecting a cub when a snag or two showed its ugly face and threatened to take my apartment and give it to some stranger who would not love it or care for it like I would.

It was either a pathological love of self-penance or desperation to get out of that humid, dark, rented basement apartment and into my own place in the sunlight. Despite the rigors of moving, I was thrilled about it in addition to the tremors, sweating and running in circles. My brain didn’t know whether to be happy or stressed out of its little nerve connections until it exploded out my nose. 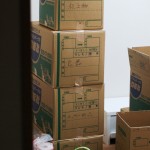 In the past, I would have said, “To Hell with it,” and shoved everything into boxes, bags and suitcases. This time I decided to do it right. Whatever I didn’t want or need was going into the trash, the recycling or the thrift shop. The only exception was going to be the Mount Everest sized pile of assorted papers to be shredded that had been accumulating for about fifteen years or so. That was bagged up, and it will be put some place where it can’t be seen until I finally figure out what to do with it.

Add to this the fact that I was moving from a one-bedroom apartment to a studio, and the discarding project took on a mind-numbing dimension. I soon developed a ruthless disregard for sentimentality combined with a willingness to live in a mess of clutter for as long as it took to get the job done. Having nerves of marshmallow rather than steel, I often found myself turning to meditation, coupled with a good old-fashioned crash.

As much as I hate the thought of my old bedsprings, that sagging couch with the sharp metal coils sticking out, that old bookcase and that ugly chest of drawers ending up in the New York City Dump, I think they are much happier there than they would have been in my new home. They would have felt horribly out of place next to the classy new trundle daybed, and they would have suffered from extreme claustrophobia. What I did to them was merciful. I had to pay the mover guys extra to get rid of them for me, but I am secure in the knowledge that I don’t have to think about them anymore. Ciao, old furniture.

On the other hand, there will always be room for that amazingly comfortable armchair, as big as it is, cat scratches and all. It knows just how to cradle me in all the right spots, and it has never tried to stab me with a metal coil.

It’s amazing how soon a studio apartment can fill up when you are dumping boxes and bags into it. Thank Heaven for closets, cabinets, drawers and bookcases. They fill up pretty quickly, too, but it’s easy to ignore how full they are, as long as you can still close them up or still have space to insert something. If there’s still room, stuff something into it. Nothing is ever cramped if you can’t see it. Those are the rules.

As of the writing of this piece, I have unpacked a lot of the bags and boxes. With the exception of two bookcases and a couple of plastic filing drawers from Staples, all the furniture is in the right place. In a few days I should be able to walk around without hindrance.

If I ever even think of moving again, I hope I have my head examined. 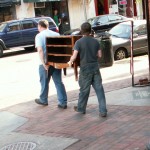 6 thoughts on “If I Ever Move Again, May I Be (Insert Horrific Curse Here)”