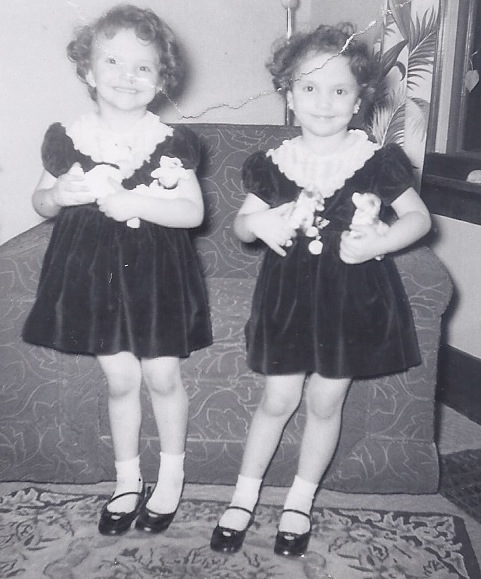 Carolyn, my significant other, is an identical twin. And while she and her sister are easy to tell apart now, that has not always been the case.

You can imagine how challenging it would have been for their parents to figure out if they were addressing Marilyn or Carolyn. They solved this problem by not even trying. Instead, they just called both girls “Sissy.” That way they avoided the embarrassing, inevitable “I’m not Carolyn; I’m Marilyn” response. To this day Carolyn calls Marilyn “Sissy,” and Marilyn calls Carolyn “Sissy.” When they exchange gifts, all of the tags say, “To Sissy. From Sissy.”

As in Disney movies, the twins took advantage of others’ befuddlement. In high school, Carolyn took both her own and Sissy’s Latin classes, while in return Sissy doubled up on P.E. classes.

One time, they also exploited their identicalness in the romance department. When they were 15, Marilyn had been ardently hoping for a date with the captain of the football team, and, finally, he called. But Sissy was violently sick with a stomach virus. Determined not to lose her chance, she said “yes” and then began pleading with Carolyn to substitute-date for her. Carolyn raised multiple common-sense objections, but Sissy prevailed. Marilyn assured her, “You don’t have to do anything but hold my place. Just be sure to get me a second date. Do whatever it takes to get me a second date.” As you might expect, the quarterback, famed for how good he was with his hands, spent all night making passes at Carolyn. Carolyn, for her part, repeatedly deflected them. After his several fumbled attempts, the QB said in exasperation, “You’re a lot more shy than I thought you’d be.” To which Carolyn replied, “I don’t do any of that on a first date.” When he asked, “What about a second date?” Carolyn told him encouragingly, “We’ll see.” The footballer did indeed call again. Marilyn returned early from this second date—looking out of sorts—marched right to Carolyn and said, “Exactly what did you say to him? He was all over me.”

Now I know what you’re wondering: “Since the twins have a history of being willing and able to impersonate one another, aren’t you concerned they might trick you?” The answer is “no.” These days it’s pretty easy to tell them apart . . . unless they’re on a car trip together and one of them calls me. You see, they often switch phones. If Carolyn is driving, I know that Sissy might call me on Carolyn’s phone, so instead of my usual “Hi, Baby”—I just say “Hi,” and if the other person just says “Hi” in response, I keep my words as neutral as possible till I can figure out whether I’m talking to Sissy number one or Sissy number two. I also have to be very careful when Sissy visits because she’s always wearing Carolyn’s clothes and the twins are of course the same height and body build, so when I’m coming up behind my wife to give her a surprise embrace . . . Well, you get the idea.

Here’s the thing: The state of North Carolina, where I reside, sets a lot of store by exactly what’s written on birth certificates. And Carolyn and Marilyn’s parents couldn’t tell them apart—didn’t even try to keep straight who was who. So who knows if when the infants learned their names, they learned them correctly? I figure there’s a 50-50 chance that the woman I’m married to, who calls herself Carolyn, is actually legally Marilyn by birth. And that’s how—as far-fetched as it might sound—it’s even odds that I’m living in sin, am not actually married to my own wife . . . but instead am legally wedded—to my sister-in-law.

My thanks to Wildacres Writers Retreat, where this piece was written.

19 thoughts on “Married to an Identical Twin”