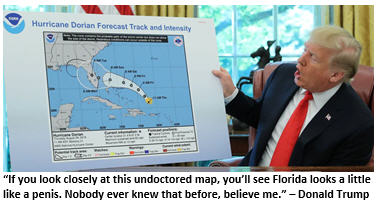 Welcome back to Fox News. In a moment, we’ll get to our top story – why 97% of Americans think Donald Trump is a better president than Abraham Lincoln, according to a recent Fox poll of white nationalists.

But first, let’s take a look at the weather with our Meteorologist-in-Chief, President Trump. So, Donald, tell me, are we in for some STORMY weather this week?

You think that’s funny, do you, Shep Smith? You’re fired. Now get that bum outta here.

Good evening, my fellow Americans. This is your President with a look at your five-day forecast. For the 137th week since I’ve been your president, the American weather continues to be great – the best weather in our nation’s history – and way better than the weather under eight years of Obama.

Looking at the national weather map, I promise you, we’re in for some tremendous weather throughout many regions of the country. At Bedminster, New Jersey, home of Trump National Golf Club, the weather will be 76 degrees, breezy and sunny all week. Closer to home, here in Washington, DC, locale of the Trump International Hotel, you won’t believe how incredible the weather is going to be. Just phenomenal. And at Mar-A-Lago, I’m calling for another week of mild temperatures in the upper 70’s with no chance of rain or humidity right up to election day in November 2020.

But we do have a few trouble spots to keep an eye on, namely in California, New Jersey, Massachusetts and Baltimore, where it will be Hell on earth. Expect temperatures to reach 115 degrees for daytime highs and plunge to minus 15 overnight. Look for massive tornado warnings in any state that did not vote for me – with the likelihood of hot balls of lava erupting near Seattle and vicious tsunami’s all along the Mexican border.

Now that Hurricane Dorian is over, I’m pleased to report that the devastation I had predicted for Alabama happened just exactly as I had said it would – just a few hundred miles east in Georgia and the Carolinas. I hope every American will join me in saying a silent prayer for the great people of Alabama – especially those who voted for me – in hopes that they will overcome their anxiety in the wake of this devastating storm.

Speaking of hurricanes, everybody’s talking about Hurricane Dorian and why it chose to strike America when it did. Most experts are saying that Hillary Clinton was behind it, in an attempt to damage my amazing golf courses in Florida and along the east coast. But she failed bigly – just like she did in 2016. Sorry, Bahamas.

Speaking of hurricanes, most people never knew that hurricanes are named in alphabetical order starting with the letter A. I was promised that after Hurricane Chantal struck, the next one would be named Hurricane Donald. But at the last minute, the Fake National Weather Service changed it behind my back to Dorian. So, I’m ordering the FBI to investigate how this could have happened. Probably the deep state.

Looking further out, the forecast for hurricanes is hard to predict. But one thing’s for sure. If I’m not re-elected in 2020, everybody should expect the nastiest hurricanes in history. Several level 5 storms, a few level 6s and maybe even a couple of level 9s or 10s. I predict some of them will be the wettest weather events in history, from the standpoint of water. 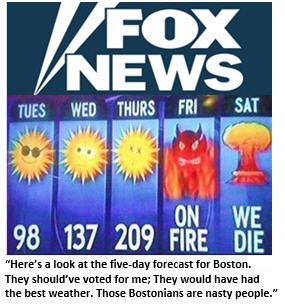 Taking a check at the national forecast, I predict the next major hurricane, which I have ordered the National Weather Service to name Hurricane Melania, will pack winds up to 390 miles an hour, and will most likely make landfall in Los Angeles and head up the coast of California, wiping out San Francisco and Portland, before jumping over the middle part of our nation and touching back down again near Chicago and Detroit, taking them out entirely. But it will leave farmers’ crops just fine. No need to thank me.

You can see my projected path of this storm in this incredibly accurate sharpie drawing of the Zone of Uncertainty, which I had nothing to do with drawing. It was that way when they gave me the map. Trust me.

Oh, and the pollen count will be slightly above normal in Atlanta over the next few days.

That’s it for weather. Now it’s time for Tucker Carlson and sports. Hey, Tucker, speaking of sports, while I was closely monitoring the path of Hurricane Dorian during my two rounds of golf last week, I got a hole in one – on a par five, believe me. But as usual, the Fake News didn’t report it. People tell me I’m a tremendous golfer.

So, Tucker, are you still betting on your New York Jets to make it to the NFL playoffs this year? If you ask me, they’re a bunch of losers. Just like Anderson Cooper. And Rosie.