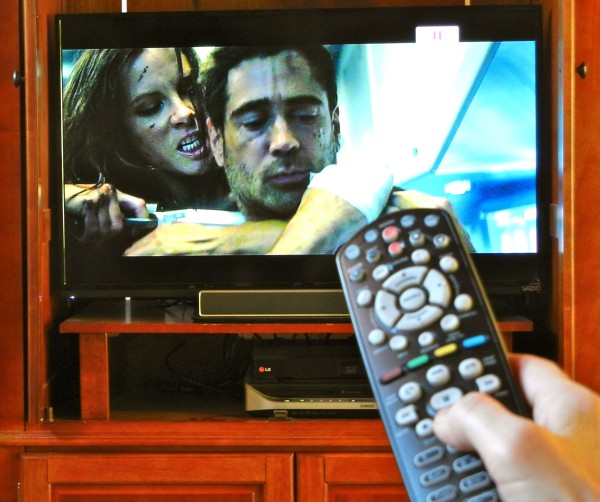 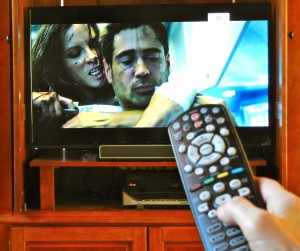 It’s a relaxing evening at home just right for watching a movie. I sit down with my wife on the loveseat and think how nice this is when our cat jumps up between us and my wife announces, “I’m picking the movie this time.”

I feel it. Something has come between us—besides the cat—and I realize that once again watching a video with my bride is going to be a struggle. Much has been made of the sexes’ battle for the remote control, but that’s only a small part of the conflict.

My wife’s announcement is tantamount to saying, “The movie you chose last time stank, so now it’s my turn.” The principle here, familiar to those who’ve played pickup basketball, is “make it/take it.” You keep the ball until you miss. Apparently my last shot was an airball.

The game rules in my house also include my wife’s insistence that the movie can’t be very violent. There go 300 and Dredd and most of the other films I like. She checks the online motion picture parental guide, which minutely details all violence; degrees, types, and duration of nudity; and exactly how many times and in what context the F-word is used.

Watching TV is even more contentious and perilous for me, and by “TV” I of course mean “transvestites.” One source of conflict is that when I watch TV by myself and a commercial comes on, I surf for a backup movie or even two backups so that I always have something interesting on the screen. Supposedly, women are great multitaskers and men are too stupid to do more than one thing at a time, but this claim is not borne out by my wife’s and my TV-watching styles. My wife wants the TV left on one channel—even during the 5-minute commercial breaks! On the other hand, I can and do watch 3 different movies sort of simultaneously. I’ll be watching Tootsie, switch to Big Momma’s House, and then to Mrs. Doubtfire plus keep up a pop-up-like running commentary of fascinating facts about the movies and actors.

“Do you know who that actor is?”

“That’s Nicholas Hoult. Do you know whom he used to date?”

“He used to date Jennifer Lawrence. Do you know whom she’s dating now?”

“She’s off-and-on seeing Chris Martin, the Coldplay singer, who used to be married to . . . ?”

Now clearly most women would appreciate my evocative questions and find my abilities impressive, but my wife just thinks I’m annoying. Yes, annoying. I don’t know why women think men are annoying when clearly we’re not annoying, not at all annoying. Annoying! Geez!

After some of my astute insights, such as “Nobody’d put a laundry basket down on the kitchen table in real life,” my wife will ask me, “Why do you always talk to the TV?”

“No you weren’t. You were talking to the TV.”

If my trenchant analysis causes my wife to miss some unnecessary dialog on a video, she’ll sigh loudly and then replay the last 10 seconds. If it’s a TV movie, say the new Total Recall, she’ll ask in an annoyed tone what the actors said. Of course I heard what they said. “That’s Kate Beckinsale,” I say. “She’s been in Serendipity, Underworld, and Pearl Harbor, and she just told Colin Farrell,

‘I’m not your wife. You just think I am because your brain has been implanted with memories. Actually I’m a secret agent, and my mission is to kill you—or at the very least to stop you from watching 3 channels at once.'”

Take some advice from me, guys: when you watch TV with the opposite sex, don’t expect to be in control. Not even remotely.

10 thoughts on “Watching TV with the Opposite SEX”