People who should know better refer to my generation as “Aging Baby Boomers.” Those who apply the term “aging” to us deserve to be strangled with a string of love beads with reefers stuck up their noses while listening to a scratched-up Janis Joplin album on an old portable stereo with a dull needle.

We’re not aging. We’re refined, like gold. We come from strong genes. Our parents came through the Great Depression and World War II, and then they had us. 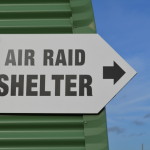 The worst thing was the Cold War, with that constant fear of being turned into instant hot air by a nuclear bomb set off by some psychotic Russian. At school, we were taught how to duck under our desks if we heard warlike noises overhead. Of course, if we were hit by The Bomb, the desks would be vaporized, too, along with the neighborhood and everyone in it, including the principal. They figured it would be easier to keep us quiet if we didn’t know we were about to be annihilated. The last thing any Catholic school wanted was unquiet kids running amok just before certain death.

When I was in the Third Grade, air raid drills were compulsory. They would have been orderly, too, if it hadn’t been for me. I had Attention Deficit Without Hyperactivity.* I only heard about 2/3 of what anyone said. Because of the missing 1/3 that I didn’t hear, coupled with a vivid imagination, I got the notion that the Communists were out to drop a Bomb on the Yakima Valley, where we all lived, and that was why we were having air raid drills. I was terrified down to my little white bobby socks.

I was also clumsy and slow. When the alarm went off, and we all had to rush to the coatroom, put on all our coats, hats, boots, etc. as fast as possible, then go to assigned places, I would be the last kid to get my gear on. Meanwhile, the kids I was supposed to be with had already taken off to wherever they were supposed to end up, leaving me behind, not knowing what to do. As our teacher, Sr. M., would tell us in Religion class, we all had crosses to bear. I was obviously hers.

My role as Sr. M.’s cross came to a head one day. During that day’s air raid drill, I was especially terrified, and I began to cry with big, loud wails and sobs. Sr. M. lost it. She picked me up and spanked me.** My own parents never spanked me, but Sr. M. did, my offense being that I didn’t want to die a violent death when I was only in the Third Grade.

I stopped crying immediately, too shocked to make any more sounds. I didn’t see that spanking coming. All the other kids were watching, which was pretty humiliating. It was a subject of derisive amusement for at least a couple of months. I wouldn’t be surprised if some of my former classmates still remember everything.

By the way, Sr. M. must have been sorry for the spanking episode. She was pretty nice to me after that.

**In those days, parents didn’t sue schools for disciplining kids. They usually took the teacher’s side. A kid could get whacked twice for the same offense.
–