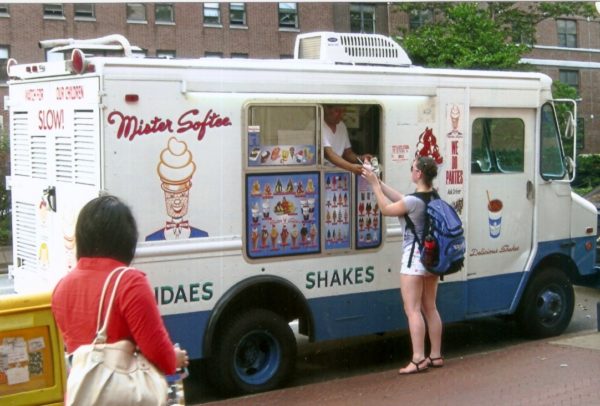 Griping about the weather is one of the great New York City pastimes. It’s right up there with jaywalking, making fun of tourists and trying to walk faster than anyone else who is using the same sidewalk. It’s not that we’re wimps … well, okay, we are wimps. This is because most of us don’t drive cars, which means that we can’t just hop from the kitchen to the garage and into an automobile. We have to be out in whatever Earth’s atmosphere is throwing at us, unless we want to stay holed up at home.

New York City’s summers are legendary. Because the temperature rarely gets above the mid-90s, those of you who live in places where summer means 100 degrees in the shade are probably asking, “What’s the big deal?” I can answer this in one word:

New Yorkers spend a typical summer day awash in water: once or twice in the shower at home and every time they step outside. Humidity also has the ability to make 90 degrees feel like 100, at the same time it is pulling every drop of moisture from your body and soaking your clothes in sweat.

That said, here is how you know it’s summer here:

1. You can feel the heat from the pavement through your shoes. New Yorkers know better than to wear flip-flops on the street in July. Those things could melt and take your feet with them.

2. Underground subway stops become makeshift Turkish baths, especially the Times Square stop on the west side IRT line. The only difference between it and a real Turkish bath is that the people on the subway platform have their clothes on.

3. You avoid getting on an almost empty subway car with plenty of available seats because you know the reason it is almost empty is that the air-conditioning isn’t working in there.

4. Your hair, which looked perfect when you left your apartment, becomes limp and droopy after five minutes outside.

5. The Mr. Softee Ice Cream Truck Song, a/k/a The World’s Most Maddening Earworm, gets more play on the street than your favorite song gets on your iPod.

6. It doesn’t really cool off at night, unless there’s a thunderstorm or something, and even then it doesn’t cool off very much. You know you shouldn’t be running your air conditioning in a thunderstorm, but you are willing to risk death to be comfortable.

I love summer, but, as a true New Yorker, I have to complain about it. It wouldn’t be right to go against tradition.

This and more of my humor can be found at Welcome to My Quirky World.