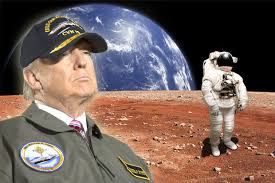 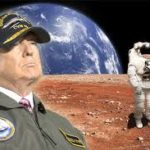 Was it in a tweet or rambling, wild discourse
That the President announced a new Space Force?
Why the push for such a costly, odd resource?
A new role for Trump, with more false claims, of course.

What fun for him to be the President
In a divided, democratic government?
No branch but Trump up in the firmament:
No court orders: no advice and no consent.

Thus says the Donald, on his way to outer space
While leaving earth a barren, hate-filled place:
“Merkel, Macron and the EU all lose face
And McCain as U.S. hero I’ll displace.”

“Farther than the car of Elon Musk I’ll fly;
Bloomberg in a limo dare not go so high.
A new constellation fills the night-time sky.
Call it not Orion’s belt for it is I.”

“The first to land on Mars, it feels so great:
Branson, Russia, China, all too late.
My own Red Planet: better to inflate
Electoral vote counts than the reddest state.”

Up, up, away, aloft, into the breach
Orbiting beyond subpoenas’ reach;
A lesson Rudy and the lawyers teach:
No one on Neptune’s ever been impeached.

Next up: the black hole in the Milky Way,
A topsy turvy world in every way:
Bizarre behaviors, normal rules at bay—
Not unlike the Oval Office every day.

“Low gravity the orbs I will explore–
But mostly golf with no one to keep score.
My weight will drop; how far my drives will soar!
Just watch Pelosi wince when I yell ‘Fore.’”

“Where one can view the blue earth rise and fall
I’ll build hotels, resorts and shopping malls
And to save the universe I’ll top it all
With one great interstellar wall.”

“Saturn has its rings and Jupiter its moons,
But no immigrants, not even from Cancun.
Barren Planet X, passed by so soon:
Like the world to come, dry streams and lifeless dunes.”

Matter dark as Donald’s brain and just as dense
Fills the vacuity of space immense,
Expanding outward from a core condensed,
As silent, cold and distant as Mike Pence.

“I’ll fly past distant suns to the births of stars;
Whole galaxies I’ll make my Zanzibars:
More realms than Tamburlaine’s or any tsar’s,
More acreage than my father owned by far.”

“I’ll fly like some bright comet past the sun,
My apotheosis just begun–
Like Daedalus or Icarus, his son,
A myth, more rocket man than Kim Jong-un.”

So off our new Odysseus did soar
With a waive and tweet above the engines’ roar,
Embarking shrewdly from his native shore
As it sinks beneath the sea forever more.

A meteoric rise, while everybody laughed.
He left a shambles, a government half-staffed,
A sinking ship of state, with no life raft.
Trump shrugs; no report from Mueller in his spacecraft.

Lift off is here; fuel cells ignite and glow.
Will he be back again? No one can know.
“Bon voyage!” Whether once a friend or foe,
All cheer. For none is loath to see him go.