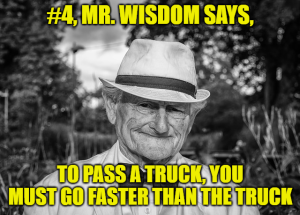 Clearly these people are truly reprehensible, bad eggs even.

What can been done to stop these speed demons?

1) Have police issue speeding tickets. This is a good, partial deterrent. It’s main flaw is that are only so man traffic cops on the road. This leaves millions of miles of roads across our nation unpatrolled. True, a number of these cops lurk in speed traps instead of patrolling dangerous stretches of traffic. This is indeed a flaw with this deterrent, but it stills holds that there aren’t enough policemen patrolling our roads to deter the speed demons. An officer of the law who isn’t there can’t issue a speeding ticket.

2) Let the insurance companies take car of the speeders. Let them charge higher insurance rates for the lead-footed drivers. Pfft! Doesn’t work. The speeding drivers just don’t give a rip.

So, what can we do? What do the speeders care about? What will they obey?

The laws of physics.

No matter how fast you drive, no matter how determined you are, you can’t drive your car through the car or truck in front of you.

This means that if all the lanes in front of you are blocked by vehicles going slower than the speed limit, you can’t speed.

But how can we rein in the speeders?

I’m glad you asked. My solutions depend of two observations that are nearly as true as a the laws of physics.

1) A significant portion of drivers are unable to drive as fast as the speed limit if they are going uphill.

All we’d have to do is make roads that only go uphill. But this isn’t true anywhere. Phooey.

2) But there will always, always be one driver that tries to pass a slow truck. However, they will drive one mile per hour faster than the truck they are driving to overtake. Then lanes are blocked by vehicles going slower than the speed limit.

Hurrah! We are onto something here. Simply drive enough trucks everywhere to slow down all the traffic in all lanes of every single road in the country.

But how do we get enough trucks on the roads for this plan to work?

Buy them! It could be the government doing the purchasing. It could be you. Do your part!

Where do we get enough truck drivers?

Hire them! Hire the unemployed, Unemployment would fall to zero. It could be the government doing the hiring. It could be you. Do your part!

There you go. Another problem solved. You may sleep easily tonight.

One thought on “I Solve the Speeding Problem”