Skip to content
Recent Humor
Wisdom for Dummies
Announcing a New, Politically Correct Name for the Washington Redskins
Scooter & Skipper and the Delayed Gratification Club
Spot on…
At the Pine-Woods Golf & Poetry Club

Make 8 equal dough balls. Dust hard surface with ⅓ cup flour. Roll out dough ball into a circle 8″ wide. Spread ½ tablespoon oil evenly over dough circle. Fold edges of dough circle in so that four parts meat in the square. You should now have a square.

Roll out square until it is again 8″ wide. (This gives the bread layers and makes it flakier.) Repeat for 7 remaining dough circles.

Serve warm with: fried eggs, honey, curries, or other stews

1) The top picture on the previous page looks like a sock. The bottom picture on that page appears to be a sock puppet. These similarities are not an accident. There are an homage to the great Rome-to-Somalia olive-oil-for-socks trade.

2) This trade started in 31 BC after Caesar Augustus secured his position as emperor with his victory over Mark Anthony in the battle of Actium.

3) Rome desperately needed a new source of socks for its vaunted army. Without good socks, the legionnaires developed foot blisters. No soldier can march far with blistered feet. If the Roman legionnaires couldn’t march, they couldn’t catch the invading barbarian hordes before they looted and fired the Roman towns. Unfortunately, the long series of Roman civil wars, 83 BC – 31 BC had completely destroyed the once vibrant sock industry. Things looked grim. The Roman Empire was readt to collapse. The plays of Plautus, Terrance, and Maccius would have been replaced by barbarian reality plays.

6) Fortunately, in 18 BC, Primus Secundus Tertius, a goat herder set out from the tiny village of Perdiem in the southern Egypt to find a missing goat. He headed south, because all good goat herders know that goat only go missing in the south.

7) He walked for years looking for that goat. He was no quitter. Finally, he came across some villagers in Somalia. They were cooking lamb stew. The villagers didn’t give their real names upon meeting Primus for the first time. After all, Somalia is an anagram for Mo’ Alias.

8) While enjoying a delicious meal, Sam and the villagers engaged in pleasant conversation and swapped witty and urbane anagrams. Eventually, Sam handed his empty bowl to the villagers; his mother had raised him to always bring his dirty dishes to the sink. As he did so, he noticed a goat tag at the bottom of his bowl. It read, “Daphne, owned by Primus Secundus Tertius.” The villagers had killed his own goat. The fact that Daphne tasted great after being marinated in lemon juice and pepper only eased his rage a tiny bit.

9) With all the wonderful books deliberately burned in Alexandria’s magnificent library in 395 AD, it’s amazing and perhaps ironic that we have amazing that we have a partial, written record of the following conversation:

Primus: You killed my Daphne?
Villager #1: Who is this Daphne? No woman around here is called Daphne.
Villager #2: I think he means his goat. Roman goat herders like to name their goats Daphne.
Villager #3, Good Primus, are referring to the goat that was in this stew?
Primus: (Shows the goat tag.) I am.

10) The villagers, as was their custom, agreed to compensate Primus with ten pairs of socks. Primus was ecstatic. Emperor Augustus had promised to give a million denarii to any one securing a sock source for the empire. So Primus became fabulously wealthy, the legionnaires got their socks, and the empire became well defended again. It was only when the olive-oil-for-socks trade route got permanently disrupted in 476 AD, that Rome fell. Today, the production of socks is protected everywhere by an international treaty. 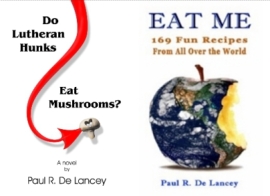