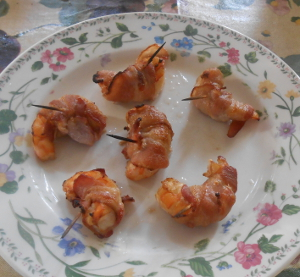 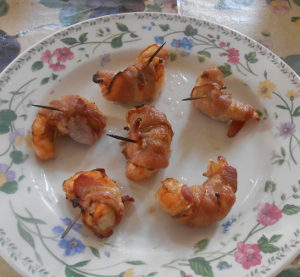 Set oven to broil and preheat to 400 degrees. Soak toothpicks in water. Slice each bacon strip into two halves crosswise.. Add shrimp, brown sugar, and Worcestershire sauce to mixing bowl. Toss shrimp until they are well coated. Wrap each shrimp with bacon. Secure with soaked toothpick. Repeat for each shrimp.

1) Sir Francis Bacon was a mainstay in the Elizabethan era because he was brilliant as all get out, being an author, statesman (Lord High Chancellor England), scientist, blah, blah, blah. . . and a budding culinary saint! Francis was researching the effect of freezing on meat when he contracted pneumonia and died. This selfless act, was no doubt, the inspiration for the safe modern freezer/refrigerator. It is tantalizing to further speculate that Sir Bacon invented the cut of pig known as bacon. Many culinary historians assert this hypothesis most vigorously, particularly so after they’ve been drinking heavily.

2) At any rate, bacon was a staple of the American culinary scene by the early 18th century. America’s settlers wouldn’t have even considered crossing the land’s great expanses without an adequate supply of bacon. Tasty bacon would go onto grow and stabilize the great American Republic.

3) Unfortunately, by 2017, demand for bacon began to outstrip its supply. The Republic is in danger. Civil unrest will surely follow. Indeed, political discourse is already getting ever more heated and frenzied. 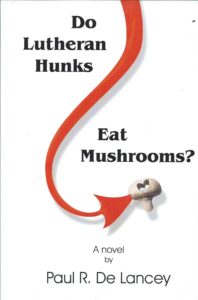