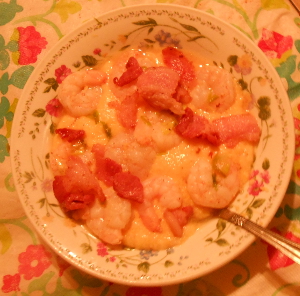 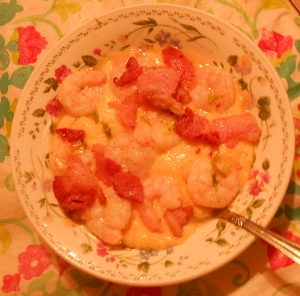 Add chicken broth, milk, and water to large pot. Bring to boil using high heat. Stir frequently. Add grits gradually, stirring with whisk until no lumps exist. Add pepper and salt. Reduce heat to warm. Simmer to 10-to-20 minutes or until grits become tender and all the water has been absorbed. Stir occasionally. Remove from heat and add butter and Cheddar cheese. Blend in cheese and butter with fork. Cover.

While liquid boils and grits become tender, mince garlic and dice green onions. Chop bacon into ½” squares. Add bacon squares to pan. Cook at medium-high heat for 3-to-5 minutes or until bacon becomes crispy, turning them over at least 1 time. Remove bacon and place on paper towel. Keep bacon grease in pan.

Add shrimp to pan. Sauté shrimp for 3 minutes at medium heat or until they start to turn pink or orange. (Don’t overcook shrimp. It will get mushy.) Add lemon juice. garlic, and green onion. Stir quickly until shrimp is well coated with garlic and green onion. Remove from heat.

1) It seems hard to believe now, but shrimp portraits were once quite popular in America during the late nineteenth century.

4) According to Dr. Keeto, horse racing was incredibly popular in the 1890s. People with too much money, having bought up anything of any value in America, turned to gambling. They wouldn’t bet on baseball. Ordinary folk did that.

5) So the filthy rich, so called because oil from their wells constantly spurted onto their clothes, would clean up and go the race tracks to wager on horses, the sport of kings.

6) Everything went well. The had fun playing the horses. They lost vast sums, of course, but they had vast sum to lose. The race course owners became quite wealthy as well. They purchased gigantic mansions and went on railroad buying sprees. The Race Track magnate, Silas Brunswick, even bought BrusselsSproutsTM for $250,000 after it came out with the BS PadTM.

7) The BS Pad, a precursor to iPhonesTM, tablets, and the such, consisted of two tin cans tied together with a string, an abacus, and a sketch pad. Improvements have been made since then. Nevertheless, it was all new back then and the sexy BS was all the rage

8) But the craze stopped a scant year later when all of a sudden shouting became socially acceptable once more.

9) Then horse racing died out. On May 5, 1897, the swiftest horses gathered for the prestigious Mississippi Derby in Biloxi. Society’s elite bet over a million on the horses. The favorites were Southern Boil and Sandstorm.

10) People still debate what happened. As the horses turned the corner to enter the final stretch, an enormous fog rolled into. When the fog had lifted, all of the horses were gone. Everyone.

11) Where had they gone? Some speculated that the horses had gone to the same parallel universe that orphan socks go to when placed in a dryer. Some folks dispute this, noting electric dryers weren’t invented back then. The proponents counter, “Where you there, na, na, na, na, poo, poo?”

12) Some folks say that a mare in heat passed by the track and that time and the stallions merely left the race to chase after her. Still others maintain mass spontaneous combustion claimed all the horses, ignoring the fact that no explosions were ever heard. I mean, really.

13) We’ll never know what happened to the race horses. The race-track owner claiming that since no horse crossed the finished line, paid off none of the bets. This defiant act angered the wealthy bettors. Horse racing rapidly fell out of favor.

14) Fortunately, the crowd spied a cocktail of shrimp–you know, like a pod of whales–swimming off shore, and fast! An energetic entrepreneur, his name is lost to history, improvised a shrimp race course. By heavens, the event was fun. Shrimp racing became the most popular social event of the 1890s.

15) Breeding shrimp for speed became a lucrative business. Wealthy owners hired artists to paint their prize shrimps. These artists loved to eat grits. Hence, shrimp and grits. There you go. 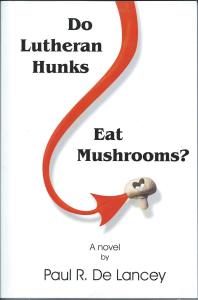